Parella is the ideal place to live in, situated at the foot of the hills that protect the village from the cold north winds. Once, in almost every arable hill area, vines were grown: farmers had to fight against hail, filossera and peronospera, but they rejoiced at harvest time and wine making process. Now instead of vineyards almost everywhere there are houses, gardens and also swimming pools.

In 1857 a temporary commission, for the general survey of 1858, divided the village into four parts:

This division already appeared in the 1779 land register maps, the oldest still existing, and was certainly effective in the previous centuries. They show that the main groups of houses were Cimavilla and Pianavilla Cantons, linked by the few houses of Mezzavilla. 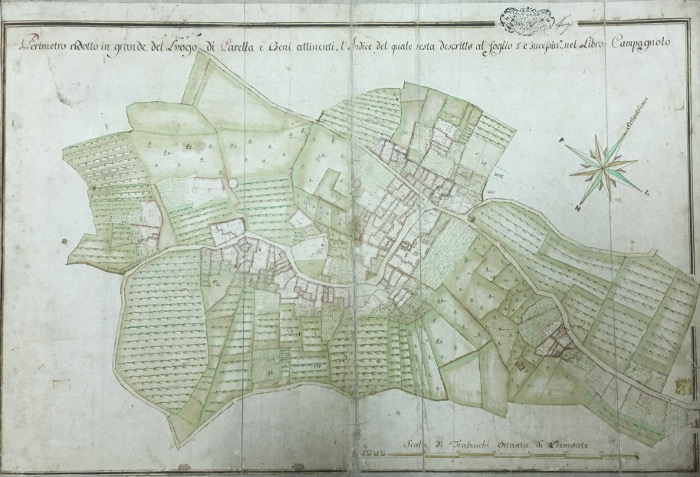 Many of the old houses, or their remains, were already mentioned in the 1545 land register which lacked maps. They have been restructed inside and partly outside to answer the new standards of life. Later, along the right side of the main street going to Castellamente, people of the upper and middle classes commissioned characteristic villas. Starting from Colleretto there are villa Ruffino, almost in front of Villa Giacosa that belonged to the poet and playwright Giuseppe Giacosa; then Villa Bosso, Villa Albertini with a large park, Villa Barattia, Villa Malvezzi, Villa Carandini, Villa Aluffi, Villa Giordano. On the left there is a row of less famous houses built after the street was constructed (1823).

In the last decades, above the row of villas mentioned before, another Canton has been added, which is still expanding. It is placed in Regione Remondà, where many new modern and elegant houses have been built. Besides Cimavilla Canton is expanding west of the ex Scipié vineyards while next to the old paper-mill buildings now stand rather heterogeneous hangars. On the other hand, the fourth canton, the isolated farmhouses and country houses including the “Cascine di Peronetto” or “Cassine” is declining even if today, with the opening of the inn “La Rosa dei Venti”, the place has become more lively and active.

Approfondisci
We use cookies to ensure that we give you the best experience on our website. If you continue, we’ll assume that you are happy to receive them.Ok